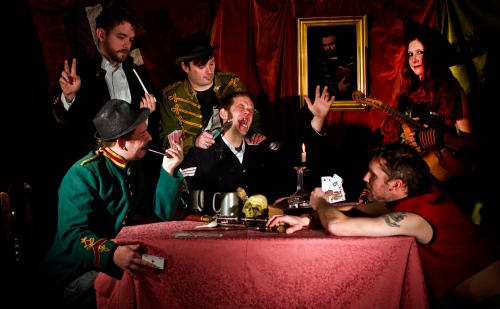 BLACK FRIDAY are a high energy Celtic folk punk band from St Germans in Cornwall. Their music is a fine mix of original songs, traditional Irish jigs, reels and ballads.

The band formed in 2006, with a musical menagerie of acoustic guitar, mandolin, bass, drums, electric guitar, fiddle and last but not least banjo. They have played all over the UK and Europe, playing well over 100 gigs in 2014 alone, and 2015 looked even busier. The band plays a variety of venues and festivals, such as The Maker Festival, The Port Eliot Festival, The Electric Picnic in Ireland, Donauinsel Festival in Austria, The Plymouth Folk Festival, The Looe Music Festival. Calstock Biker Festival, Burnham-on-Sea Folk Festival and Wimbourne Folk Festival.

“I really enjoyed that! Can I buy you a double Jameson!”

Shane MacGowan from the Pogues

“Having seen you live it was as a good a night as I could imagine stood in front of a band!”

With raving reviews from BBC Radio 2’s Mark Lamarr and Shane MacGowan from the Pogues, Black Friday are set to be a fantastic addition to the Altitude 2016 line up.